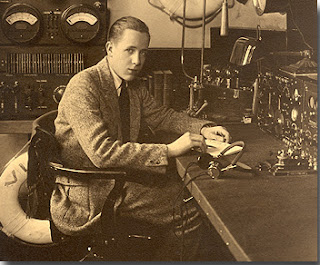 “The Universe is full of magical things, patiently waiting for your wits to grow sharper.” --Eden Philpotts

Of all the names of 20th Century science, perhaps none is more obscure, or more curious, than that of Thomas Townsend Brown. Defying Gravity is a biographical mystery that ponders the question “how come nobody has ever heard of T. Townsend Brown?” Townsend Brown was a celebrated prodigy of electrical science during the 1920s, was respected as an innovative physicist throughout the mid-century, and is generally regarded as the seminal pioneer in the field of anti-gravity research and technology. So how is it that the trail of Brown’s life and work is almost impossible to trace? Why is it that every lead seems to trail off down some dark corridor of intrigue or run into a brick wall of officially “classified” material?

Townsend Brown was a teenager when he discovered a theoretical link between electricity and gravity. The same principal is also secretly deployed in some of America’s most sophisticated combat aircraft.The concept he pioneered is, ironically, now embodied in a common household appliance that is advertised on television every day.

Brown was blessed with the unique ability to "see what others have seen and think what nobody has thought." As a teenager in the 1920s, working in a well-equipped laboratory in the basement of his prominent Ohio family's opulent home, Brown noticed an unusual effect when high voltage was applied to a Coolidge X-Ray tube. With that observation, he came to believe he had discovered a link between electricity and gravity - and a way to lift and propel flying vehicles by purely electrical means. Thus begins the odyssey of T. Townsend Brown, who spent a lifetime crisscrossing the hemisphere in the relentless pursuit of his "flying saucer pipe dreams."The same principal is also secretly deployed in some of America’s most sophisticated combat aircraft.

So why is this man's life such a complete mystery?

Born in 1905 to a prominent Midwest family, Thomas Townsend Brown was expected to take the reins of the family’s diverse business interests. Like so many of his now-revered predecessors, he chose instead to explore the mysteries of a much larger universe.

Expanding on his original discoveries through more than four decades, Brown built numerous wingless devices that flew without any conventional means of propulsion – the precursors to a future generation of gravity-defying “electric spacecraft.”

As his unique insight and skills opened doors that are not typically available to lesser mortals, Brown’s career traversed the narrow path between science and science fiction. Along the way, he encountered the sort of obstacles that confront any original thinker who dares to challenge the orthodoxy of conventional wisdom.

His singular abilities also drew Brown into a shadow world of secret forces that operate simultaneously within and apart from the world's sovereign political powers. Defying Gravity will reveal how Brown’s inventions achieved contact with “dimensions out of our space,” a concept just now earning favor among the most advanced cosmological theories.

By focusing on the intimate details of Brown's life — and the impact such a life can have on the lives of those closest to him — Defying Gravity should appeal to all readers of history and biography. Written by science historian Paul Schatzkin (author of The Boy Who Invented Television), Defying Gravity will portray the gracious and resolute way Brown faced the obstacles that challenged him, shed light on the way some truly groundbreaking discoveries get absorbed into the "black world" of classified military research, and in the process encounter some of the ancient puzzles of life on this planet.

Posted by Chelsea Noggle at 8:02 AM