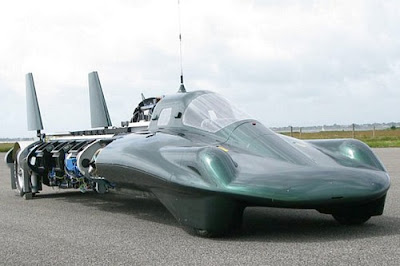 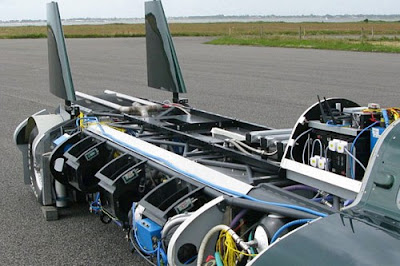 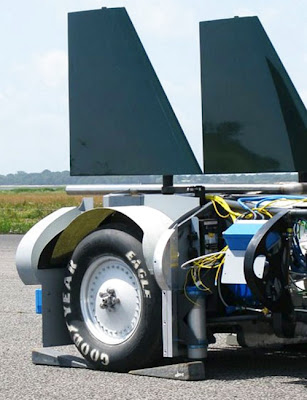 Unlike a steam locomotive, which uses a steam-powered injector system, the British Steam Car uses compressed-air-powered hydraulics to inject distilled water and pre-prime itself. The water is pumped into the start of 1.86 miles of tubing to develop three megawatts of heat to convert water into 750 F steam. This super-heated “dry” steam is then directed down the car via heavily lagged pipes and two enormous industrial steam valves, which act as throttles, and then into the two-stage turbine. “That’s where we turn pressure into velocity,” says Candy. The steam is injected into the turbine at over two times the speed of sound; under the assault, the turbine revolves at up to 13,000 rpm. The turbine drives the rear wheels via a conventional crown wheel and pinion. The vehicle turns 10.5 gallons of water a minute into super-heated steam at 40 times atmospheric pressure. More information here on the Hacked Gadgets Blog
Posted by Flying out of this World at 10:13 AM