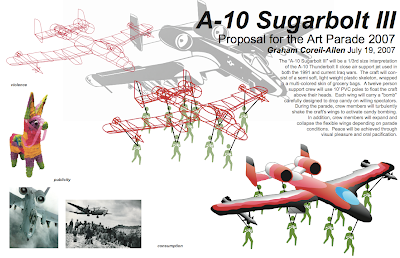 The “A-10 Sugarbolt III” will be a 1/3rd size interpretation
of the A-10 Thunderbolt II close air support jet used in
both the 1991 and current Iraq wars. The craft will con-
sist of a semi soft, light weight plastic skeleton, wrapped
in a multi-colored skin of grocery bags. A twelve person
support crew will use 10’ PVC poles to float the craft
above their heads. Each wing will carry a “bomb”
carefully designed to drop candy on willing spectators.
During the parade, crew members will turbulently
shake the craft’s wings to activate candy bombing.
In addition, crew members will expand and
collapse the flexible wings depending on parade
conditions. Peace will be achieved through
visual pleasure and oral pacification.
Posted by Flying out of this World at 2:17 PM