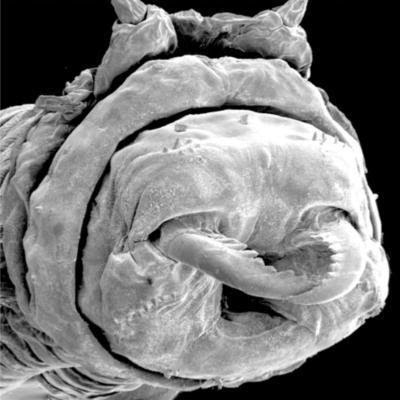 Researchers in California and New Hampshire report the first detailed characterization of the protein composition of the hard, fang-like jaws of a common marine worm. Their work could lead to the design of a new class of super-strong, lightweight materials for use as construction and repair materials for spacecraft, airplanes, and other applications.
In the new study, Chris C. Broomell and colleagues note that Nereis virens, also known as the sandworm or ragworm, is a burrowing marine worm found in shallow waters in the North Atlantic region. Researchers remain intrigued by the remarkable hardness of its jaws and long pincers, which rivals that of human teeth and exceed the hardness of many synthetic plastics. But little is known about the exact chemical composition of these structures.
Broomell and colleagues collected the jaws of 1,000 worms and analyzed their protein content using high-tech instrumentation. They found that the primary chemical in the jaws and pincers of the worm is a unique protein, named Nereis virens jaw protein-1 (Nvjp-1), which is rich in the amino acid histidine.The researchers also characterized the chemical conditions needed for its formation, such as the presence of zinc, which could allow researchers to create synthetic versions of this super-hard, lightweight material.
--------------------------------------------------------------------------------
Journal reference:
Broomell et al. Cutting Edge Structural Protein from the Jaws of Nereis virens. Biomacromolecules, 2008; 9 (6): 1669 DOI: 10.1021/bm800200a
Adapted from materials provided by American Chemical Society.
Posted by Chelsea Noggle at 7:21 AM