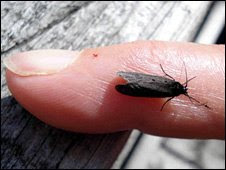 A moth found on only four previous occasions since 1853 has been rescued from a spider's web close to where it was first recorded. The black-winged and orange bodied Ethmia pyrausta is so rare it has gained almost mythical status, said Butterfly Conservation Scotland (BCS). It was spotted and photographed by Andy Scott and Margaret Currie. Their find was made near Loch Morie, Easter Ross, Highlands, close to the original specimen site. The moth was identified by experts Mark Young and Roy Leverton, who were leading a BCS workshop at Aigas Field Centre in Inverness-shire. Apart from the original 1853 specimen, only four others have ever been found in the UK. Two were found in 1996 on the top of Glas Maol in the Grampians with a further two found nearby. The caterpillars have never been found in Britain. BSC said prior to the Loch Morie find there were doubts that the species still lived in the Highlands. Mr Young said: "It is now up to us to try and find out where the moth breeds and to make sure that its habitat is safe."
Posted by Chelsea Noggle at 7:23 AM