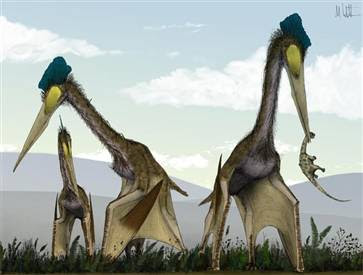 Scientists say that giant pterosaurs called Quetzalcoatlus had to stalk prey on land.

With a name like T. rex, you'd expect to be safe from even the fiercest paleo-bullies. Turns out, ancient flying reptiles could have snacked on Tyrannosaurus rex babies and other landlubbing runts of the dinosaur world. A new study reveals that a group of flying reptiles from the Age of Dinosaurs, 230 million to 65 million years ago, did not catch prey in flight, but rather stalked them on land. Until now, paleontologists pictured the so-called "winged lizards" or pterosaurs as skim-feeders. In this vision, the creatures would have flown over lakes and oceans grabbing fish from the water's surface, much as gulls do today. The new findings, detailed this week online in the journal PLoS ONE, don't ground the animals totally.

"In our hypothesis, flight is primarily a locomotive method," said co-researcher Mark Witton of the University of Portsmouth in England. "They're just using it to get from point A to point B. We think the majority of their lives, when they're feeding and reproducing, that's all being done on the ground rather than in the air." To uncover these feeding habits, Witton and Portsmouth colleague Darren Naish analyzed fossils of a group of toothless pterosaurs called azhdarchids, which are much larger on average than other pterosaurs. For example, one of the largest azhdarchids, Quetzalcoatlus, weighed about 550 pounds (250 kilograms) with a wingspan of more than 30 feet (10 meters) and a height comparable to a giraffe.

Witton and Naish learned that more than 50 percent of the azhdarchid fossils had been found inland. Other skeletal features, including long hind limbs and a stiff neck, also didn't fit the profile of a mud-prober or skim-feeder. "All the details of their anatomy, and the environment their fossils are found in, show that they made their living by walking around, reaching down to grab and pick up animals and other prey," Naish said.

A skim-feeder, such as a gull, trawls its lower jaw through the water, eventually smacking into a fish or shrimp and pulling it from the water. "Regardless of what they hit, the impact force drives the head and neck underneath the body and into the water, thus requiring a hugely flexible neck," Witton said. This is the case with gulls and pelicans (which are considered plunge divers), but an azhdarchid's neck, despite potentially reaching nearly 10 feet (3 meters) in length, was super stiff. "Whatever these animals were doing, it had to involve minimal neck action," Witton said.

Their tiny feet also ruled out wading in the water or probing the soft mud for food. "Some of these animals are absolutely enormous," Witton told LiveScience. "If you go wading out into this soft mud, and you weigh a quarter of a ton, and you've got these dinky little feet, you're going to just sink in."The reptile's head also was pretty lengthy, up to 10 feet (3 meters). So Witton said an azhdarchid would only have to dip its head part way to the ground, enough for the tip of its jaws to touch down, to hunt and feed on terrestrial prey. Back before they went extinct 65 million years ago during the event that also killed off non-avian dinosaurs, these pterosaurs could lunch on animals ranging from small birdlike Velicoraptors to T. rex babies to amphibians.

By Jeanna Bryner
Senior writer for livescience.com, through www.MSNBC.com
Posted by Chelsea Noggle at 7:22 AM