Explosions on the Moon? 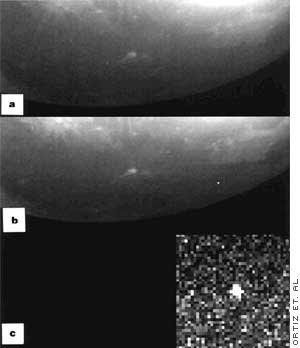 Not so long ago, anyone claiming to see flashes of light on the Moon would be viewed with deep suspicion by professional astronomers. Such reports were filed under "L" ... for lunatic. Not anymore. Over the past two and a half years, NASA astronomers have observed the Moon flashing at them not just once but one hundred times.

"They're explosions caused by meteoroids hitting the Moon," explains Bill Cooke, head of NASA's Meteoroid Environment Office at the Marshall Space Flight Center (MSFC). "A typical blast is about as powerful as a few hundred pounds of TNT and can be photographed easily using a backyard telescope."

The impactor was a tiny fragment of extinct comet 2003 EH1. Every year in early January, the Earth-Moon system passes through a stream of debris from that comet, producing the well-known Quadrantid meteor shower. Here on Earth, Quadrantids disintegrate as flashes of light in the atmosphere; on the airless Moon they hit the ground and explode. "We started our monitoring program in late 2005 after NASA announced plans to return astronauts to the Moon," says team leader Rob Suggs of the MSFC. If people were going to be walking around up there, "it seemed like a good idea to measure how often the Moon was getting hit. Almost immediately, we detected a flash."

That first detection — "I'll never forget it," he says — came on Nov. 7, 2005, when a piece of Comet Encke about the size of a baseball hit Mare Imbrium. The resulting explosion produced a 7th magnitude flash, too dim for the naked eye but an easy target for the team's 10-inch telescope. A common question, says Cooke, is "how can something explode on the Moon? There's no oxygen up there."

These explosions don't require oxygen or combustion. Meteoroids hit the moon with tremendous kinetic energy, traveling 30,000 mph or faster. "At that speed, even a pebble can blast a crater several feet wide. The impact heats up rocks and soil on the lunar surface hot enough to glow like molten lava — hence the flash." During meteor showers such as the Quadrantids or Perseids, when the Moon passes through dense streams of cometary debris, the rate of lunar flashes can go as high as one per hour. Impacts subside when the Moon exits the stream, but curiously the rate never goes to zero. "Even when no meteor shower is active, we still see flashes," says Cooke.

These "off-shower" impacts come from a vast swarm of natural space junk littering the inner solar system. Bits of stray comet dust and chips off old asteroids pepper the Moon in small but ultimately significant numbers. Earth gets hit, too, which is why on any given night you can stand under a dark sky and see a few meteors per hour glide overhead — no meteor shower required. Over the course of a year, these random or "sporadic" impacts outnumber impacts from organized meteor showers by a ratio of approximately 2:1. "That's an important finding," says Suggs. "It means there's no time of year when the Moon is impact-free."

Fortunately, says Cooke, astronauts are in little danger. "The odds of a direct hit are negligible. If, however, we start building big lunar outposts with lots of surface area, we'll have to carefully consider these statistics and bear in mind the odds of a structure getting hit." Secondary impacts are the greater concern. When meteoroids strike the Moon, debris goes flying in all directions. A single meteoroid produces a spray consisting of thousands of "secondary" particles all traveling at bullet-like velocities. This could be a problem because, while the odds of a direct hit are low, the odds of a secondary hit may be significantly greater. "Secondary particles smaller than a millimeter could pierce a spacesuit," notes Cooke.

At present, no one knows how far and wide secondary particles travel. To get a handle on the problem, Cooke, Suggs and colleagues are shooting artificial meteoroids at simulated moon dust and measuring the spray. This work is being done at the Vertical Gun Range at NASA's Ames Research Center in Mountain View, CA. Meanwhile, back at the observatory, the team has upgraded their original 10-inch (25 cm) telescope to a pair of telescopes, one 14-inch (36 cm) and one 20-inch (51 cm), located at the Marshall Space Flight Center in Alabama. They've also established a new observing site in Georgia with a 14-inch telescope. Multiple telescopes allow double- and triple-checking of faint flashes and improve the statistical underpinnings of the survey.

"The Moon is still flashing," says Suggs. Indeed, during the writing of this story, three more impacts were detected, bringing the total to 103.

By Tony Phillips
Science@NASA
http://www.space.com.scienceastronomy/080521-moon-explosion.html
Posted by Chelsea Noggle at 10:53 AM