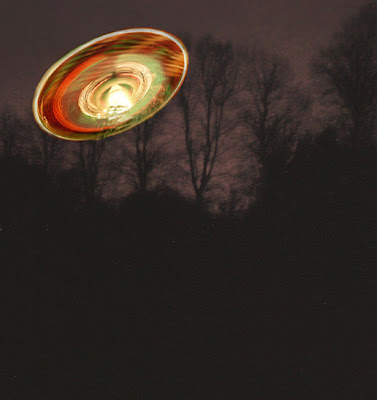 Photoshop rendition of Tristan's UFO?
I got an interesting phonecall from my brother Tristan just last night, regarding a puzzling experience he had on Thursday evening around 8:30pm. My brother is a freshman in college, and still lives at my home in Cumberland County, Pennsylvania. He was taking the garbage out to the end of our driveway (quite a distance from our house), when he heard a strange crackling sound.

"First I looked behind me and I didn't see anything, so I kept walking. Then I saw an orange light, really fast, like a flash of light, and I looked up in the sky and there was this ring of orange light hovering up there. I dropped the garbage and just stood there looking at it...I could see an airplane flying in the sky as well, and I could see the blinking light in the sky go right behind the ring, so I knew it was a solid object. I watched it for a couple of seconds, and the center of the ring suddenly lit up orange. It hovered for about 3 seconds like that, and then I saw the whole thing shutter, before it sped off over Brenneman's house. It blinked out, the lights went out and it disappeared even though it hadn't gone far enough to be to the horizon yet...it was invisible. I was still standing there shocked when I realized it had left a trail of orange light, I mean you could still see it lightly glowing where it had been and along its path...I ran back to the house to get someone but the glow faded before anyone else could see it...It didn't really scare me, I don't know why. It just, like mesmerized me. I felt like it darted away because it knew I seen it."

My brother told me about his exerience in detail, though he was not unnerved by it. Tristan said he actually felt priveleged in seeing it. I have to admit, I'm a bit jealous. Oddly enough, my mother saw something strange at nearly the same spot when I was a child. She had went out late at night to light the pilot light in the greenhouse and encountered an orange fireball shooting throught the sky.
Posted by Chelsea Noggle at 3:13 PM