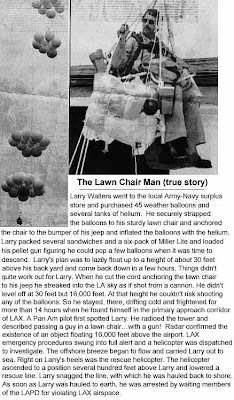 According to published reports, Walters was employed as a truck driver in Southern California. On July 2, 1982, he fastened 42 surplus balloons to a lawn chair and launched from his girlfriend's San Pedro home. He carried various supplies with him as well as a CB radio and a BB gun to shoot balloons one at a time to descend. He didn't realize how powerful the buoyancy of the balloons was. When he cut a rope holding him to terra firma, he took off with such a jolt that another anchor rope broke under the stress and he shot upward so quickly that his eyeglasses flew to the ground. He floated around the L.A. basin for several hours and reached altitudes of up to 16,000 feet. According to an article in the New York Times the next day, Walters was spotted by pilots from both TWA and Delta Airlines. It was cold at 16,000 feet and he started shooting some of his balloons to descend, but dropped his BB gun and had to wait for his rig to come down on its own. He landed in a residential neighborhood in Long Beach where got tangled in some power lines, causing a power blackout. He told reporters that his weather balloon flight had been a dream of more than 20 years. Larry Walters died eleven years after his flight from what the Los Angeles Times described as a self-inflected gunshot wound.

More information on Lawnchair Larry's flight here
And here
Posted by Flying out of this World at 1:21 PM