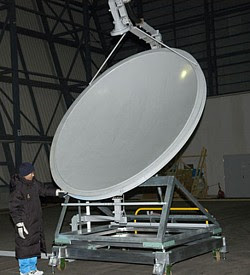 For decades, scientists have explored the possibility of using space-based solar cells to power the Earth. Some see orbiting power stations as a clean and stable energy source that promises to slow global warming, while others dismiss the idea as an expensive and impractical solution to the world’s energy problems. While the discussion goes on, researchers at the Japan Aerospace Exploration Agency (JAXA) have begun to develop the hardware. AXA, which plans to have a Space Solar Power System (SSPS) up and running by 2030, envisions a system consisting of giant solar collectors in geostationary orbit 36,000 kilometers above the Earth’s surface. The satellites convert sunlight into powerful microwave (or laser) beams that are aimed at receiving stations on Earth, where they are converted into electricity.

More at Pinktentacle.com
Posted by Flying out of this World at 4:16 PM