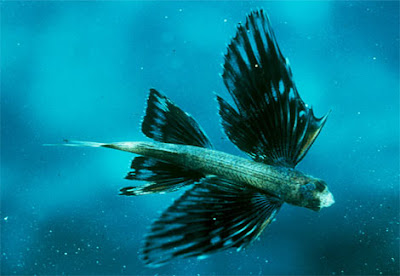 STOCKHOLM, Sweden (API) - Seventy-two small fish were briefly launched into space by researchers Thursday, hoping their swimming patterns would shed some light on motion sickness. German researchers sent the cichlids on a 10-minute rocket ride that blasted off from a launch pad in northern Sweden, said Professor Reinhard Hilbig, who was in charge of the project. "They were very happy, I think they want to have another flight," he said. The thumbnail-sized fish were filmed as they swam around weightlessly in small aquariums during the unmanned space flight. The German team will now study the video to see if some of the fish swam in circles because that is what fish do when they experience motion sickness, said Hilbig, of the Zoological Institute at the University of Stuttgart. He said scientists hope the experiment can help explain why some people experience motion sickness while others do not. The mechanisms involved are similar for both fish and humans. Hilbig said the fish landed safely and appeared to be in good condition. Cichlids were picked for the experiment because they are sturdy fish who were deemed to have good chances to survive the stress of a space flight. "Goldfish are a little bit fat and messy, while the cichlid fish is a well-trained, sporty fish with muscles," he said.

Note: the image is of an actual flying fish, but not one of the fish in space. Once I can locate the latter, it will be posted. Ever onward!
Posted by Flying out of this World at 5:52 PM