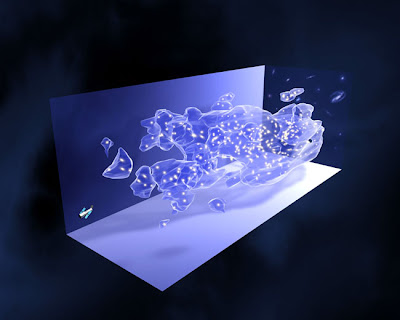 Astronomers believe that at least 80 percent of the matter in the universe is utterly invisible. Such "dark matter" presumably seeded the formation of galaxies and keeps them clustered together, yet its elusive qualities have long thwarted scientific investigation. Recent reports are beginning to demystify the unseen components of the cosmos.

Astronomer Andy Taylor at the Royal Observatory Edinburgh in Scotland studied how the gravitational pull of dark matter bends light from bright galaxies behind it. In this way he was able to trace the dark component around Abell 901/2, a supercluster of 100 galaxies. The results show that the galaxies are bunched within huge clumps of dark matter, which in turn are connected by long, dark filaments.

Cosmologist Carlton Baugh at the University of Durham in England has run computer models simulating the generic properties of dark matter. The models predict that the brightest galaxies should arise within massive concentrations of dark matter, where powerful gravitational forces would cause them to cluster together tightly. Examining a survey of 250,000 galaxies, Baugh and his colleagues found the expected clustering pattern and affirmed the guiding role of dark matter in galaxy formation.

Astrophysicists Ofer Lahav and Oystein Elgaroy at Cambridge University have estimated how much dark matter might actually consist of a known particle, the neutrino. Galaxy clustering is sensitive to the neutrino's mass: The heavier the particle, the fewer clumps there will be in the universe. Lahav and Elgaroy find that the observed galaxy clumping indicates that neutrinos have at most one-billionth the mass of a hydrogen atom, meaning they make up at most one-fifth of all dark matter.

Two years ago physicist Pierluigi Belli of the University of Rome claimed he had directly detected a speck of dark matter—a weakly interacting massive particle, or WIMP. Here the news is not good. Physicist Richard Schnee of Case Western Reserve University reports that no other group has been able to replicate the results. "But I think there is a very good chance that we can detect dark matter in the next decade," he says.
Posted by Flying out of this World at 11:42 AM

This is so interesting

Do a search on Dark Matter, you will come up with some interesting material. I've also got an article in my office I can copy for you. e