Water on the Moon 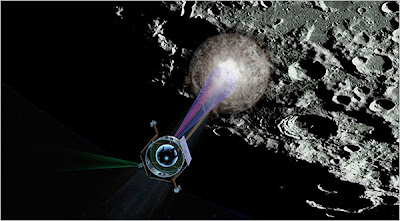 Scientists have confirmed that a significant amount of water has been found on the moon, as reported by Anthony Colaprete, an investigator for NASA's Lunar Crater Observation and Sensing Satellite. The Lcross Satellite crashed into a crater near the South Pole of the moon, the impact of which stirred up several gallons of water.

Questions are raised by this discovery, not only about possible life forms past or present; but also, at least to my mind, issues of colonization, ownership & property rights, and whether humans will believe that this is "their" resource to use and or exploit, and if so, which humans? Americans, or all humans?
Posted by Netherzone at 8:37 AM