We May All Be Aliens 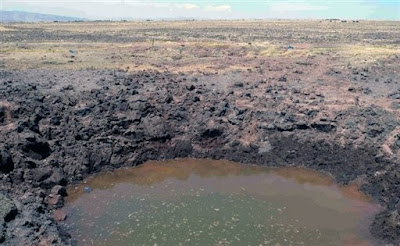 Genetic material from outer space found in a meteorite in Australia may well have played a key role in the origin of life on Earth, according to a study to be published Sunday.

European and US scientists have proved for the first time that two bits of genetic coding, called nucleobases, contained in the meteor fragment, are truly extraterrestrial. Previous studies had suggested that the space rocks, which hit Earth some 40 years ago, might have been contaminated upon impact. Both of the molecules identified, uracil and xanthine, "are present in our DNA and RNA," said lead author Zita Martins, a researcher at Imperial College London.

RNA, or ribonucleic acid, is another key part of the genetic coding that makes up our bodies. These molecules would also have been essential to the still-mysterious alchemy that somehow gave rise, some four billion years ago, to life itself. "We know that meteorites very similar to the Murchison meteorite, which is the one we analysed, were delivering the building blocks of life to Earth 3.8 to 4.5 billion years ago," Martins told AFP in an interview. Competing theories suggest that nucleobases were synthesised closer to home, but Martins counters that the atmospheric conditions of early Earth would have rendered that process difficult or impossible. A team of European and US scientists showed that the two types of molecules in the Australian meteorite contained a heavy form of carbon -- carbon 13 -- which could only have been formed in space.

"We believe early life may have adopted nucleobases from meteoric fragments for use in genetic coding, enabling them to pass on their successful features to subsequent generations," Martins said. If so, this would have been the start of an evolutionary process leading over billions of years to all the flora and fauna -- including human beings -- in existence today.

The study, published in Earth Planetary Science Letters, also has implications for life on other planets. "Because meteorities represent leftover materials from the formation of the solar system, the key components of life -- including nucleobases --could be widespread in the cosmos," said co-author Mark Sephton, also at Imperial College London. "As more and more of life's raw materials are discovered in objects from space, the possibility of life springing forth wherever the right chemistry is present becomes more likely," he said. Uracil is an organic compound found in RNA, where it binds in a genetic base pair with another molecule, adenine. Xanthine is not directly part of RNA or DNA, but participates in a series of chemical reactions inside the RNA of cells.

The two types of nucleobases and the ratio of light-to-heavy carbon molecules were identified through gas chromatography and mass spectrometry, technologies that were not available during earlier analyses of the now-famous meteorite. Even so, said Martins, the process was extremely laborious and time-consuming, one reason it had not be carried out up to now by other scientists.
Posted by Chelsea Noggle at 8:50 AM