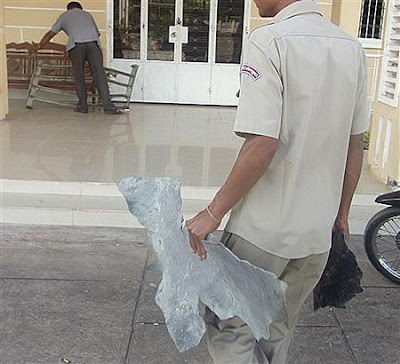 HANOI - An unidentified flying object exploded in mid-air over a southern Vietnamese island, state media said Wednesday, a day after Cambodia's air force retracted a report of a mysterious plane crash. The Vietnam News Agency said residents of Phu Quoc island, 10 km (6 miles) off the coast of the Cambodian province of Kampot, found shards of grey metal, including one 1.5 meters (1.5 yards) long. "The explosion happened at about 8 km (5 miles) above the ground, and perhaps it was a plane, but authorities could not identify whether it was a civil or military aircraft," VNA said in a report headlined "UFO explodes over Phu Quoc Island."Soldiers were sent out to look for wreckage and survivors, and local authorities contacted airlines in Vietnam, Cambodia and Thailand, but received no reports of missing aircraft, the official state news agency added.
Villagers in Kampot said Tuesday that they had heard a loud explosion. Wednesday they told Reuters they had found small chunks of metal near the coastline. Kung Mony, deputy commander of Cambodia's Air Force, said Tuesday he had been told of a foreign plane crashing in Kampot province, but later backed off his claims of an aircraft accident.
(Writing by Grant McCool and Ed Cropley in Bangkok; Editing by Bill Tarrant for reuters.com) 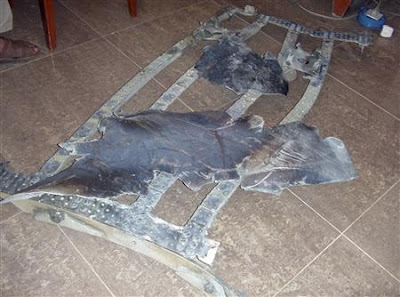 Posted by Chelsea Noggle at 7:57 AM