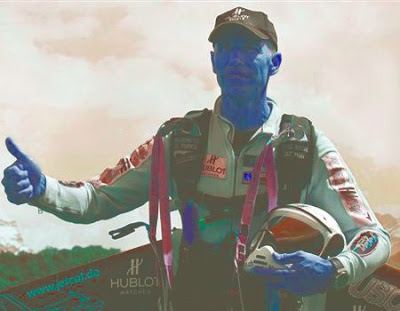 Why Did Blogger mess up the colors? I don't know, sorry....

May 14 2008: Yves Rossy, known as the 'Fusion Man,' flies with a jet-powered single wing over the Alps in Bex, Switzerland.Years ago, aviation enthusiast and inventor Yves Rossy dreamed of soaring through the air. "This flight was absolutely excellent," the extreme sports enthusiast said after touching down on an airfield near the eastern shore of Lake Geneva. Half an hour earlier Rossy had stepped out of the Swiss-built Pilatus Porter aircraft at 7,500 feet, unfolded the rigid 8-foot wings strapped to his back and dropped.Passing from free fall to a gentle glide, Rossy then triggered four jet turbines and accelerated to 186 miles an hour as a crowd on the mountaintop below gasped — then cheered.

His mother, who was among the spectators, told journalists she felt no fear. "He knows what he's doing," Paule Rossy said.Steering only with his body, Rossy dived, turned and soared again, flying what appeared to be effortless loops from one side of the Rhone valley to the other. At times he rose 2,600 feet before descending again.

"It's like a second skin," he later told reporters. "If I turn to the left, I fly left. If I nudge to the right, I go right."

Rossy then performed a stunt he had never before tried. After one last wave to the crowd, the rocket man tipped his wings, flipped onto his back and leveled out again, executing a perfect 360-degree roll that even a bird would find impossible.

"That was to impress the girls," he later admitted.Wednesday's five-minute flight nearly never happened. Rossy said his engineers worked until the last minute to fix one of the four kerosene-fueled engines that power his flight.He said he is ready now for a bigger challenge: crossing the English Channel later this year.The stunt, which will be shown on live television, will test his flying machine to the limit. Rossy said he plans to practice the 22-mile trip by flying between two hot-air balloons.

"I still haven't used the full potential," he said.Rossy told The Associated Press that one day he also hopes to fly through the Grand Canyon.To do this, he will have to fit his wings with bigger, more powerful jets to allow for greater maneuvering. The German-built model aircraft engines he uses already provide 200 pounds of thrust — enough to allow Rossy and his 120-pound flying suit to climb through the air. 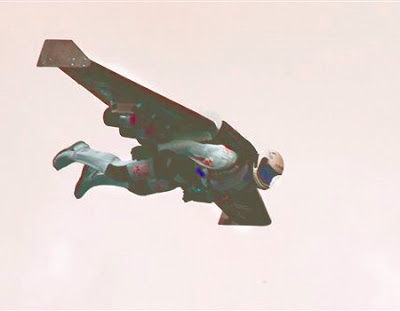 "Physically, it's absolutely no stress," Rossy said. "It's like being on a motorbike." But on this ride, even the slightest movement can cause problems. Rossy said he has to focus hard on relaxing in the air, because "if you put tension on your body, you start to swing around." Should things go wrong — and Rossy says they have done more times than not — there's always a yellow handle to jettison the wings and unfold the parachute."I've had many 'whoops' moments," he said. "My safety is altitude."

Rossy — whose sponsors have dubbed him "Fusion Man" — says his form of human flight will remain the reserve of very few for now. The price and effort involved are simply too enormous, he says.So far Rossy and sponsors have poured more than 200,000 Swiss francs, or $190,000, and countless hours of labor into building the device. He would not estimate how much his device would cost should it ever be brought to market.

But, he believes similar jet-powered wings one day will be more widely available to experienced parachutists ready for the ultimate flying experience.That is, if they don't mind missing out on the breathtaking panorama above the Swiss Alps.
"I am so concentrated, I don't really enjoy the view," Rossy said. 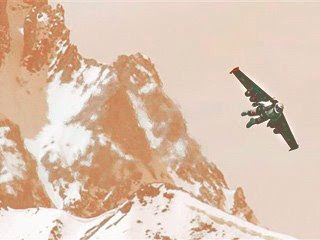 The Associated Press contributed to this report.
Posted by Chelsea Noggle at 10:05 AM