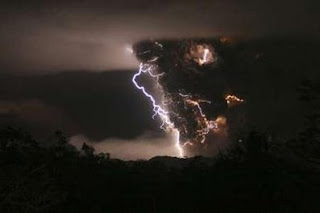 Lightning bolts appear above and around the Chaiten volcano as seen from Chana, some 30 kms (19 miles) north of the volcano, as it began its first eruption in thousands of years, in southern Chile May 2, 2008. Cases of electrical storms breaking out directly above erupting volcanos are well documented, although scientists differ on what causes them. Picture taken May 2, 2008.REUTERS/Carlos Gutierrez (CHILE)
Posted by austin rocket at 9:38 PM