If you are eating eggs for breakfast, put down that fork. The Australian Egg Corporation has expressed surprise at the discovery of a gecko inside a chicken egg. Darwin, Australia, doctor Peter Beaumont was cooking dinner when he cracked open the egg and found the dead gecko inside the shell.

Health authorities say the discovery is nothing to be alarmed about and it is being examined at a laboratory. The research and development program manager with the Egg Corporation, David Witcombe, says he has never heard of such a case before.

“Certainly the gecko wouldn’t have been ingested by the bird. It would be physically impossible for it to make its way from the digestive tract into the area where the egg’s formed.

“So it’s a case of the gecko actually making its way through the cloaca of the bird and onto the developing egg.” 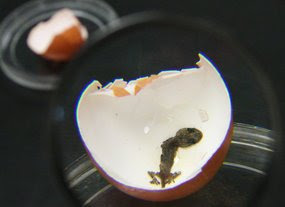