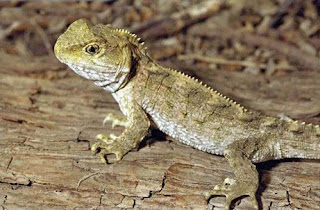 New Zealand's "living dinosaur," the tuatara, hasn't changed its look in millions of years. But the reptile is actually evolving faster than any other animal studied so far, new DNA analysis reveals.

Scientists recovered DNA from 8,000-year-old tuatara bones and compared it with DNA in blood samples from living tuatara. The modern species is the only surviving member of the order Sphenodontia, which flourished around 200 million years ago.