Art on the Moon 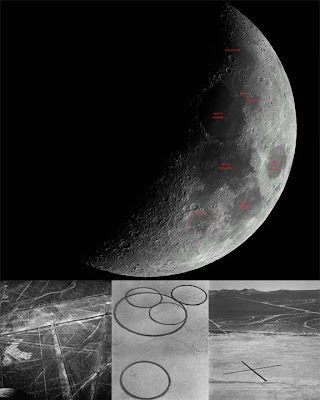 In 2003, Craig Kalpakjian proposed a series of Earthworks-style drawings that would be executed on the surface of the moon, like the Nazca Lines or 60's bad boys Michael Heizer and Dennis Oppenheim's desert drawings. He called them Moonworks.

More information on the Moon Museum on the Reckon.vox.com link above, with drawings by six leading contemporary artists of the day: Andy Warhol, Robert Rauschenberg, David Novros, Forrest "Frosty" Myers, Claes Oldenburg, and John Chamberlain. The Moon Museum was supposedly installed on the moon in 1969 as part of the Apollo 12 mission.
Posted by Flying out of this World at 12:06 PM