US Plans to Shoot Down Its Own Satellite 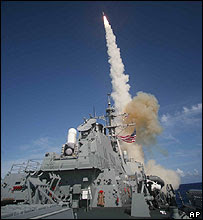 The US military is planning to shoot down a broken spy satellite due to crash land on Earth in the next few weeks, the Pentagon has announced. President George W Bush approved the option to fire a missile from a US Navy ship to destroy the satellite before it enters the atmosphere, officials said. They say the satellite contains a hazardous material which could be fatal if inhaled by humans. A US general denied claims that the main aim was to destroy secret parts. General James Cartwright said confidential components would be burned up in the atmosphere and, in any case, that would not be a reason for shooting down the satellite. He said the National Reconnaissance Office "bird", launched in December 2006, had lost power and communications shortly after it entered space and a controlled re-entry was not possible. The broken satellite had been predicted to reach the top of the Earth's atmosphere towards the end of February or early March and officials could not predict where it would land. The general said the window of opportunity for the strike would open in the next three or four days and last for about a week.
Burning sensation
Deputy National Security Adviser James Jeffries said thousands of space objects fell to Earth each year, without threat to humans. "What makes this case is a little bit different... was the likelihood that the satellite upon descent to the Earth's surface could release much of its 1,000lb plus (454 kg) of its hydrazine fuel as a toxic gas," he said. He said it was unlikely to hit a populated area, but "there was enough of a risk for the president to be quite concerned about human life". The hydrazine rocket fuel, which would have been used up had the satellite been operational, is in a tank that would survive re-entry. Gen Cartwright said that exposure to the hydrazine would have similar effects to inhaling chlorine or ammonia - a burning sensation in lungs and, if too close and too much, then possibly death. If the hydrazine tank did burst, the danger zone would be an area covering the size of two football pitches. He said that blowing the satellite up would disperse the hydrazine harmlessly in space, leaving only small-scale satellite debris to fall harmlessly to Earth.