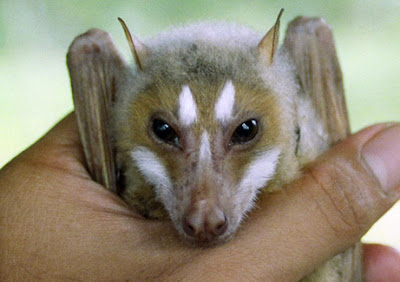 Jake Esselstyn, a biologist with the University of Kansas, was among a team of researchers that found the animal, a type of fruit bat, last year while surveying forest life on the island of Mindoro "When we first arrived on Mindoro, a local resident that we hired as a guide described the bat to me in great detail, and he asked me what it was called," Esselstyn said."I politely told him that there was no such bat. I was wrong." Several days into the survey, the scientists accidentally captured a creature in a net that fit the guide's description: a large flying fox with bright orange fur and distinctive white stripes across its brow and jaw."Our guide's description of the animal was quite accurate, and I had to apologize for not believing him," Esselstyn said, adding that the animal is now known as the Mindoro stripe-faced fruit bat. In his own defense, the scientist pointed out that the species' closest known relative lives some 750 miles (1,200 kilometers) away on an island. "It makes you wonder if there are other related species on islands between [the two]," he said. "It also makes you realize how there are probably many more species which have yet to be discovered—in the Philippines and elsewhere," Esselstyn added. "This discovery emphasizes the need for a great deal more basic biodiversity inventory research."
Posted by louis at 5:02 AM