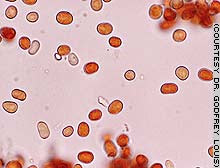 Scientists have yet to identify these unusual red particles.As bizarre as it may seem, the sample jars brimming with cloudy, reddish rainwater in Godfrey Louis's laboratory in southern India may hold, well, aliens.In April, Louis, a solid-state physicist at Mahatma Gandhi University, published a paper in the prestigious peer-reviewed journal Astrophysics and Space Science in which he hypothesizes that the samples -- water taken from the mysterious blood-colored showers that fell sporadically across Louis's home state of Kerala in the summer of 2001 -- contain microbes from outer space.Specifically, Louis has isolated strange, thick-walled, red-tinted cell-like structures about 10 microns in size. Stranger still, dozens of his experiments suggest that the particles may lack DNA yet still reproduce plentifully, even in water superheated to nearly 600 degrees Fahrenheit . (The known upper limit for life in water is about 250 degrees Fahrenheit .)So how to explain them? Louis speculates that the particles could be extraterrestrial bacteria adapted to the harsh conditions of space and that the microbes hitched a ride on a comet or meteorite that later broke apart in the upper atmosphere and mixed with rain clouds above India.

If his theory proves correct, the cells would be the first confirmed evidence of alien life and, as such, could yield tantalizing new clues to the origins of life on Earth.

Last winter, Louis sent some of his samples to astronomer Chandra Wickramasinghe and his colleagues at Cardiff University in Wales, who are now attempting to replicate his experiments; Wickramasinghe expects to publish his initial findings later this year. Meanwhile, more down-to-earth theories abound. One Indian government investigation conducted in 2001 lays blame for what some have called the "blood rains" on algae. Other theories have implicated fungal spores, red dust swept up from the Arabian peninsula, even a fine mist of blood cells produced by a meteor striking a high-flying flock of bats. Louis and his colleagues dismiss all these theories, pointing to the fact that both algae and fungus possess DNA and that blood cells have thin walls and die quickly when exposed to water and air.
More important, they argue, blood cells don't replicate. "We've already got some stunning pictures -- transmission electron micrographs -- of these cells sliced in the middle," Wickramasinghe says. "We see them budding, with little daughter cells inside the big cells."
Louis's theory holds special appeal for Wickramasinghe. A quarter of a century ago, he co-authored the modern theory of panspermia, which posits that bacteria-riddled space rocks seeded life on Earth.
"If it's true that life was introduced by comets four billion years ago," the astronomer says, "one would expect that microorganisms are still injected into our environment from time to time. This could be one of those events."
The next significant step, explains University of Sheffield microbiologist Milton Wainwright, who is part of another British team now studying Louis's samples, is to confirm whether the cells truly lack DNA. So far, one preliminary DNA test has come back positive.
"Life as we know it must contain DNA, or it's not life," he says. "But even if this organism proves to be an anomaly, the absence of DNA wouldn't necessarily mean it's extraterrestrial."
Louis and Wickramasinghe are planning further experiments to test the cells for specific carbon isotopes. If the results fall outside the norms for life on Earth, it would be powerful new evidence for Louis's idea, of which even Louis himself remains skeptical.