Is there life on Mars? Is it us, Earthlings? 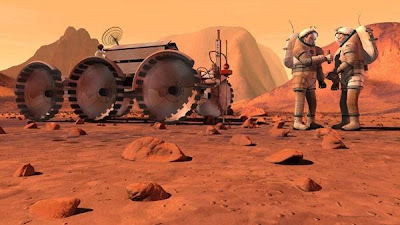 NASA urged to focus on sending people to Mars
16:06 15 February 2008
NewScientist.com news service
David Shiga
NASA should focus its efforts on mounting a human mission to Mars, and downgrade its plans for a human presence on the Moon, says a distinguished group of space experts, including former NASA officials and ex-astronauts. A group of about 45 people met at Stanford University in California, US, on 12 and 13 February for a meeting to reconsider NASA's human space exploration plans, including the possibility of sending astronauts to a near-Earth asteroid, rather than to the Moon. The timing of the conference during an election year highlights the possibility that the next US president could shift NASA's spaceflight priorities, which were authorised by Congress in 2005. Press coverage leading up to the event focused on the idea of an asteroid mission. But although the idea was discussed at the meeting, attendees did not embrace it as an alternative to the Moon. Instead, the space experts urged NASA to focus more on human missions to Mars, and endorsed a greater role for international cooperation in NASA's human space exploration plans. Since US president George W Bush first announced his "Vision for Space Exploration" in 2004, NASA has said that returning to the Moon would serve as a stepping stone for getting to Mars.
'Bogged down'
But conference co-organiser Scott Hubbard, former director of NASA's Ames Research Center in Moffett Field, California, US, and now a professor at Stanford, says NASA's plans have evolved over time into building a permanent lunar base. "There's a consensus I think that we had to re-elevate Mars as the goal, to reinforce the drive to not get bogged down in other places," he said. Still, the group did not endorse the idea of skipping the Moon and going to a near-Earth asteroid instead. NASA chief Mike Griffin has been vocally opposed to the idea of shifting the agency's priorities towards an asteroid mission, and on Wednesday told a congressional hearing he thought the proposal was "foolish, frankly". The Moon is a more appropriate first destination beyond low-Earth orbit because it takes just three days to reach, Griffin said. NASA could develop its spaceflight abilities relatively easily there before embarking on more ambitious missions, he said. In contrast, it would take months to make a roundtrip journey to a near-Earth asteroid.

"I believe people will find the Moon to be an exciting and interesting place for humans in the future," he added. "I just cannot agree with so-called space policy experts who believe the Moon is not an appropriate goal for our exploration efforts."The conference attendees appeared to have accepted the argument. "We heard from the advocates for the other destinations, like near-Earth objects," Hubbard said. "I think we didn't see at this point a compelling reason to not include the Moon as a next stepping stone destination." "I came here as a 'Mars direct' proponent and I changed my mind," said co-organiser Kathryn Thornton, a former space shuttle astronaut and now a professor at the University of Virginia. "I now feel that the Moon as a stepping point is a prudent decision." Nonetheless, there was general agreement that NASA should scale down its lunar plans and scepticism that the agency would meet its goal of returning to the Moon by 2020 within its current budget, although conference organisers did not specify another date for either the Moon or Mars.
'Broader collaboration'
There was also a consensus among attendees that there should be more cooperation between the US and other countries on human space exploration. Under the so-called "critical path" doctrine that NASA has adopted, the agency plans to develop all the necessary capabilities for getting to the Moon itself, relegating other nations to secondary roles at best. "We're urging the next administration to revisit that requirement to see if there's some broader international collaboration that will add this capability without putting the entire budget on the back of the US," Hubbard said. Such a collaboration could even include China, Hubbard said, even though the US State Department said in 2007 it was questioning any future space cooperation with China following that country's test of an anti-satellite weapon earlier that year. "Given that they've already demonstrated human spaceflight capability, and we've seen the value through the International Space Station of reaching out to other countries … I think it would be great, personally, to see China engaged in discussion about this," Hubbard said.
Posted by Flying out of this World at 5:47 PM