Falling out of this world: The Mystery of the Flying Moose 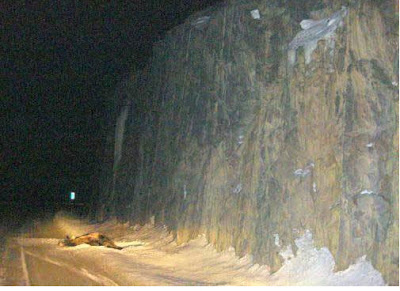 A swing-shift trooper based in Girdwood, Peterson was cruising the Seward Highway the night of Feb. 2 a couple miles north of McHugh Creek when something big and black fell from the sky, landing about 20 feet from his car.

“Falling rock!” he thought, ready to steer clear if it bounced onto the highway.
When the rock didn’t roll or shatter, Peterson’s brain came up with a crazy image: “Falling moose?”

An adult moose, wandering rocky terrain more suitable to the Dall sheep that populate it, plunged to its death from the tall cliffs that hug a highway famous for its scenery and wildlife. The animal landed on the side of the road just a few yards in front of Peterson, who figures it fell 150 feet, maybe farther. He snapped a couple of photos and called one of the charities that salvage road kill to tell them there was a moose available at Mile 113 .

Then he started wondering what happened. Did the moose jump? “How would you say it — moose-icide? He probably thought he was the only moose, with all those sheep around,” Peterson said. More likely, though, something spooked the moose and it fell. It was windy that night, Peterson said, so maybe a gust startled it. Or maybe the moose merely misstepped.

“I’m sure the moose didn’t jump,” state wildlife biologist Rick Sinnott said. “They occasionally have bad days like the rest of us. They slip and fall. Maybe he was reaching for a branch and the snow just gave way.” In his years on the job, Sinnott has seen many moose die in many ways. He’s heard tales of them breaking through ice and drowning, jumping off railroad bridges at the sound of a train, falling off small banks. Once he saw the remains of two bulls that died together during a rutting battle when their antlers got hooked together by a single piece of barbed wire. But a plunge from a tall cliff? Sinnott doesn’t think it happens often.

In 1995, a moose calf slipped off a cliff and fell 100 feet to its death in nearly the same spot, but flying moose remain an oddity. As for Peterson, he’s been a trooper for five years and has seen lots of things fall from cliffs while on patrol — rocks, snow, mud, cars. Cars? Yes, cars: “I used to work in the Valley,” he said, explanation enough.

But he always figured moose held steadfastly to the earth. He knows better now.

“They can fly and they can land,” he said. “Just not very well.” 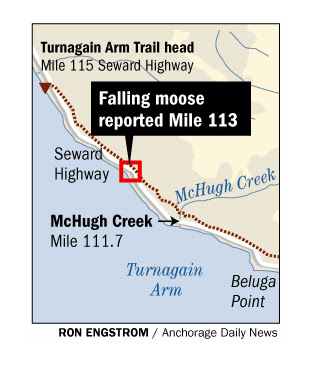