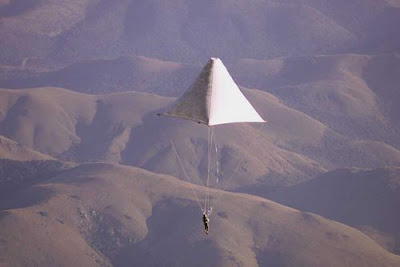 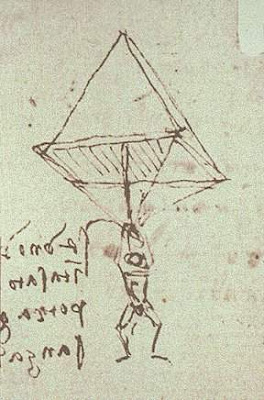 Leonardo da Vinci, the most versatile genius of the Renaissance, is best remembered as the painter of the Mona Lisa (c. 1503) and The Last Supper (c. 1495). But he is almost equally famous for his astonishing multiplicity of talents: architecture, sculpture, music, engineering, geology, hydraulics and the military arts, all with success, and in his spare time doodled sketches for working parachutes and flying machines like helicopters that resembled inventions of the 19th and 20th centuries. He made detailed drawings of human anatomy which are still highly regarded today. Was also known for his engineering of canal locks, cathedrals, and engines of war. Leonardo also was quirky enough to write notebook entries in mirror (backwards) script, a trick which kept many of his observations from being widely known until decades after his death.

The History of the Parachute Invention
The first parachute had been imagined and sketched by Leonardo Da Vinci in the 15th century. Leonardo's parachute design consists of sealed linen cloth held open by a pyramid of wooden poles, about seven metres long. The original design was scribbled by Da Vinci in a notebook in 1483. An accompanying note read: "If a man is provided with a length of gummed linen cloth with a length of 12 yards on each side and 12 yards high, he can jump from any great height whatsoever without injury."
Credit for the invention of the first practical parachute frequently goes to Sebastien Lenormand who demonstrated the parachute principle in 1783. A French aeronaut (pilot of a balloon or lighter-than-air aircraft), Jean Pierre Blanchard, claimed the invention of the parachute in 1785, and the first successful parachute descent from a great height was made in 1797 by the French aeronaut Jacques Garnerin, who dropped 3,000 ft (920 m) from a balloon. Parachutes began as an escape system for persons aboard balloons or aircraft unable to land safely. In 1887, Captain Thomas Baldwin invented the first parachute harness and in 1890, Paul Letteman and Kathchen Paulus invented the method of folding or packing the parachute in a knapsack to be worn on the back before its release. On Tuesday, 27 June, 2000 BBC News Online's Dr Damian Carrington reported that Leonardo Da Vinci was proved right, over 500 years after he sketched the design for the first parachute. A British man, Adrian Nicholas, dropped from a hot air balloon 3,000 metres (10,000 feet) above the ground, after ignoring expert advice that the canvas and wood contraption would not fly. But in the wide open spaces of Mpumalanga, South Africa, Mr Nicholas safely floated down, saying the ride was smoother than with modern parachutes. Mr Nicholas cut himself free when he reached 600m (2,000 ft) and deployed a second modern parachute. This ensured the heavy device did not crash down on top of him on landing. The parachute's great weight was due to the use of materials that would have been available in medieval Milan like canvas and wood, rather than modern fabrics and light materials. Period tools were also used.
Mr Nicholas said he thought Da Vinci would have been pleased, even if the vindication of his idea came five centuries late.
Posted by Flying out of this World at 1:08 PM