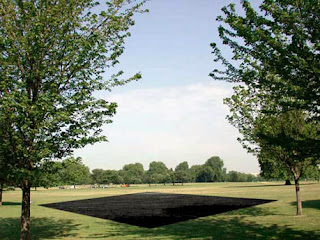 "Black Spot", 2005, was a process in three stages. The first stage was to obtain a Satellite image of an area - in this instance Hyde Park, London. The second was to pinpoint a single pixel on that photograph and replace it with a black square of Polythene. The third was to take a second satellite photograph of the same area.
Posted by Matt Sears at 7:59 PM