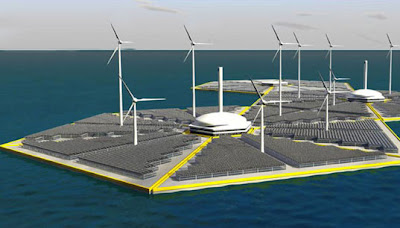 Artificial Energy Islands Could Power the World
Ocean waves are already being used as a source of renewable energy, but could differences in water temperatures in the sea be our next source of green power? A decade old idea to generate renewable electricity for the globe with offshore, floating ‘Energy Islands’ could soon become a reality. The concept - creating artificial islands to collect wind, wave and solar power in the tropics - is based on the work of Jacques-Arsène d’Arsonval, a 19th-century French physicist, who envisioned the idea of using the sea as a giant solar-energy collector. Inspired by Jacques-Arsène d’Arsonval, architect and engineer Dominic Michaelis, his son Alex Michaelin (also an architect), and Trevor Cooper-Chadwick are developing a new technique called Ocean Thermal Energy Conversion (OTEC) that takes advantage of differences in temperature between the ocean surface sea (up to 29°C in the tropics) and water a kilometer down (which is typically 5°C). Here’s how it works: warmer surface water is used to heat liquid ammonia, converting it into vapor, which expands to drive a turbine — which in turn produces electricity. The ammonia is then cooled using cold water from the ocean depths, returning it into a liquid state so the process can start all over again. Their goal is to build a network of “energy islands”: floating hexagonal-shaped platforms of reinforced concrete and corrosion-resistant metals that would generate electritict via wind, wave, and solar in addition to having an OTEC plant. It’s estimated that each island complex could produce about 250MW, and that 50,000 “energy islands” could meet the world’s energy requirements (as well as provide two tons of fresh water per person per day for the entire world population — desalinated water is one byproduct of the OTEC process). OTEC plants work best when there’s a temperature difference of 20°C between water at the surface and the water below, making tropical and sub-tropical seas the best candidates for energy islands. The concept will be launched later this year at Sir Richard Branson’s Virgin Earth Challenge, which offers $25 million in prizes for innovative solutions for combating global warming. Via the Guardian & the Telegraph & www.inhabitat.com
Posted by Flying out of this World at 1:25 PM